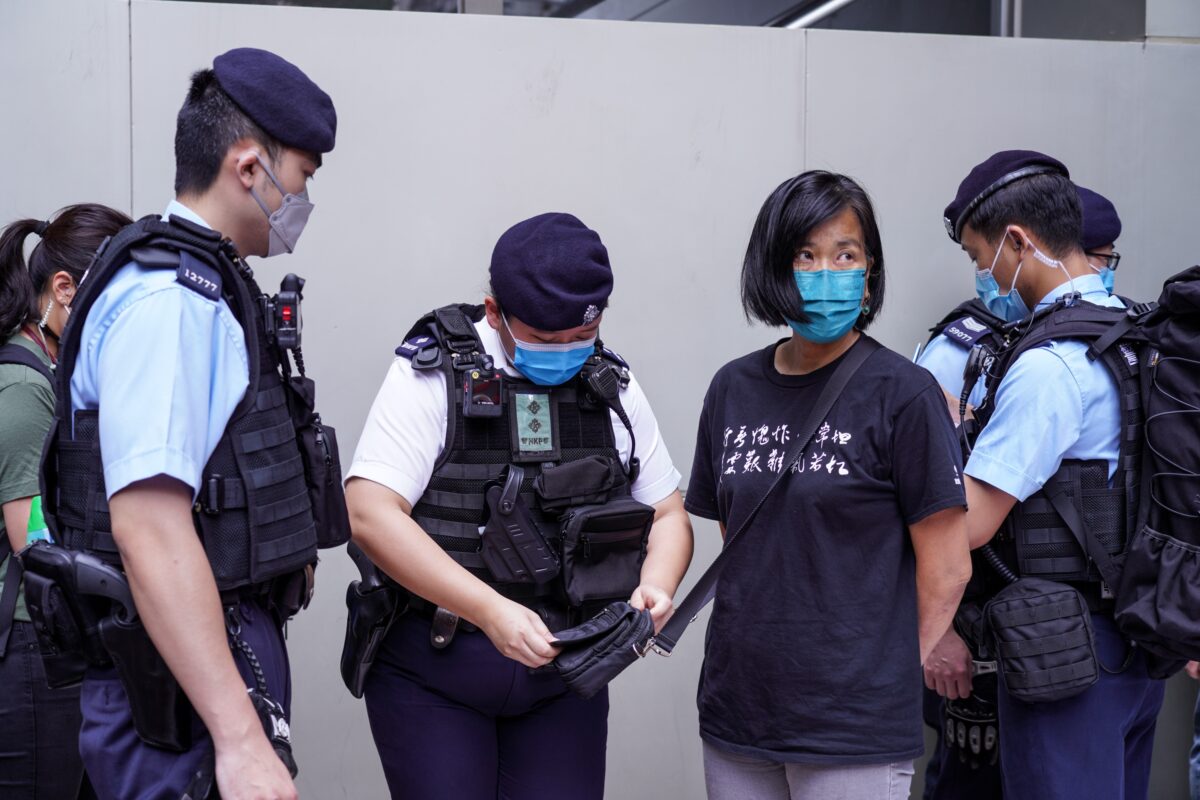 Chan Po-ying, chairman of the League of Social Democrats (LSD), posted on the party newspaper Facebook on July 17, stating that under intense pressure, he was forced to delete online posts accused of violating “Hong Kong’s National Security Law (NSL),” and specifically pointed out that “details cannot be disclosed”. In the article, she underlined: “LSD will continue to speak, speech is innocent and long live democracy”. Similar incidents involving the removal of content required by the NSL also occurred in May.

The Hong Kong Public Opinion Research Institute (HKPORI) and the “Hong Kong People’s Book Fair” have also come under similar pressure. Some scholars have criticized the government for abusing its power. Coupled with the fact that there is no longer a watchdog force in society, the government can do whatever it wants. The situation in Hong Kong may well be worse than in mainland China.

The Epoch Times called Ms. Chan on July 17, but she did not reveal exactly what pressure she was under. When asked if she would face greater pressure by continuing to speak out, she replied that it would depend on the actual situation at the time, reiterating that “even in the current situation of leeway quite limited, we should keep talking. ”

After Chan posted the message, many netizens left comments supporting LSD and fully understood their decision. One said: “Even in such a difficult situation you are always ready to talk. The voice may be weak, but it’s still a voice, and we really appreciate it. As long as everyone is still together and safe, that’s already the biggest consolation!

More and more netizens criticized the authorities: “The evil repression, although it can make people helpless, has also made Hong Kongers understand the true face of totalitarianism”, “Speech can be stopped but never the thought on the inside !” They also left the following message: “Is this the real story that the Hong Kong government wants to tell the outside world!?”

Avery Ng Man-yuen, the former chairman of LSD, also shared Chan’s post on his Facebook page and typed “#Apologise to Hongkongers” in the comments column.

Scholar: It may be worse than mainland China

Chung Kim-wah, a former assistant professor in the Department of Applied Social Sciences at Polytechnic University (PolyU), pointed out that the government is abusing its power in this way. Although there is no more oversight power from society as a whole, “the administration has virtually a free hand to manipulate, it is likely that Hong Kong will one day become worse than mainland China” .

He also criticized the current government’s actions as “completely irrational and putting all rights of interpretation in their hands”. He criticized their way of practicing censorship of speech for censorship, as they never tried to divulge the what and why of something that was being censored. This never conforms to universal human rights protocols and violates the Basic Law. With all this evidence, he described that Hong Kong had been under such “white terror” for a long time.

The League of Social Democrats (LSD) said on June 28 that National Security Police questioned volunteers and associates. After assessing the situation, they decided to abandon their protest scheduled for July 1 for the first time due to pressure from concerned parties. In addition to informing the public, there would be no demonstrations; they also apologized, saying “as the situation is extremely difficult, please forgive us”.

On June 29, six LSD members, Raphael Wong Ho-ming, Chan Po-ying, Avery Ng Man-yuen, Tsang Kin-shing, Dickson Chau Ka-fat and Yu Wai-pan, were raided by the police of the national security. After that, they were taken to different police stations for interviews and were reminded that there would be no demonstrations on July 1.

LSD members held annual protests on July 1. Until July 1, 2021, when the police denied their request for a march, many pro-democracy activists started the march anyway. In the aftermath, eight people were arrested, including four LSD members. The four LSD people were sentenced to 6 to 12 months in prison.

Under the NSL, LSD is one of many civil organizations under pressure, and it has been fortunate not to have been disbanded to date. On the polling day of the Chief Executive election in May 2022, he even formed a three-person parade that met the COVID-19 pandemic prevention requirements to stage a protest against said election within small circles of selected voters.

Like LSD, the Hong Kong Public Opinion Research Institute (HKPORI) was another under similar pressure on the eve of July 1. main social indicators, which was originally due to be published on July 1, until July 5.

The survey that HKPORI wanted to delay was the “Latest Findings and Summary of SAR Government Popularities, PSI, Five Basic Social Indicators and Hong Kong SAR Anniversary Survey” under the “Summary on Trust and Confidence Indicators under “One Country, Two Systems 25-Year Mid-Term Review Series”. Either way, the survey results and relevant data would still be published online.

The survey results showed that the five core social indicators of ‘stability’, ‘freedom’, ‘prosperity’, ‘rule of law’ and ‘democracy’ were all below the 25-year average. Among them, the “stability” index had the highest score at 5.15, which was lower than the previous average of 6.44, while the “freedom” index, which had the highest score. high in 25 years with an average of 7, fell to 5.13 this time.

NSL pressure on the publishing industry

In addition, Hillway Culture, an organizer of the “Hong Kong People’s Book Fair” which was originally scheduled to open on July 14, pointed out that the organizer had received a written notice from the real owner’s real estate agent a day before. the opening, claiming that he violated the lease agreement and demanded his immediate removal.

Raymond Yeung Tsz-chun, the head of Hillway Culture, pointed out that the pro-communist group “Politihk Social Strategic” had called on its supporters to come to the scene to check if there were any illegal books on display. He thought the site owner may have been under political pressure and decided it was better to end the cooperation. It didn’t seem to have anything to do with Hong Kong law. She specifies that the owner refused to come and inspect the premises and requested an immediate withdrawal, contrary to usual commercial practices.

Yeung pointed out that in principle, Hong Kong still has freedom of publication. He indeed checked the laws and regulations and did his best to ensure that the books on display would not break the law. He pointed out that the incident reflects the pressure exerted by the NSL which penetrated the publishing industry and scared him. He thought it would become increasingly difficult to publish books in the future.

Wong Yeung-tat, the founder of “Civic Passion,” which disbanded in May, also had his residence and business inspected by the National Security Department, demanding that “sensitive content” be removed. At the time, he said, “I am in Hong Kong today and I continue to work in the media, but the risk of doing so increases more and more every day.”

US Consul: NSL has a ‘chilling effect’

He said the implementation of the national security law is the most obvious sign of the Chinese government’s fundamental doubt, creating an atmosphere of fear and coercion by vaguely defining “national security” and, through its broad application and its brutality, creates a deterrent effect. “The National Security Law of 2020 was imposed on the city by Beijing,” he said.