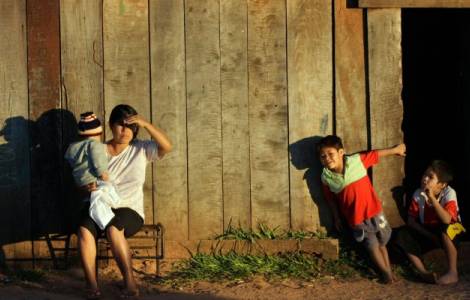 Asuncion (Agenzia Fides) – “The National Constitution, in the fifth chapter, recognizes the existence of indigenous peoples as groups of cultures prior to the formation and organization of the Paraguayan State, and guarantees the right to preserve and to develop their ethnic identity, ”recalls the National Coordination of Indigenous Pastoral Care, which is part of the Episcopal Conference of Paraguay, in a statement to public opinion in which it underlines the situation of indigenous peoples in the country. The declaration follows the “Open Letter” addressed to the powers of the State by the Permanent Council of the Episcopal Conference, in which it is requested, among other things, “that the rights of indigenous peoples and the laws governing them be respected. », (See Fides, 11/30/2021). The Coordination of Indigenous Pastoral Care recalls that for more than 50 years it has been walking with these peoples “in search of a land free from evils and in the fight for territorial security, guaranteed by national and international laws”.
He therefore underlines that it is the duty of the Paraguayan State to “guarantee the respect of our regulations concerning the communal ownership of land for the indigenous communities, the aim of which is the conservation and development of their particular ways of life”. The Indigenous Pastoral press release also cites ILO Convention 169 on Indigenous and Tribal Peoples in Independent Countries, ratified by National Law 234/93, which “provides that the peoples concerned are granted the right to property and possession of the lands they traditionally occupy. “. For this reason, it calls for the necessary measures to safeguard this right and, at the same time, to safeguard the right of indigenous peoples to use lands which are not exclusively occupied by them, but” to which they have always had access. for their traditional and subsistence activities ”.
“Unfortunately, these laws have not been respected – the statement concludes – and this is reflected in the recent evictions of indigenous communities. In this context, we demand strict respect for national laws and international agreements, signed and ratified by the Republic of Paraguay “. (SL) (Agenzia Fides, 2/12/2021)