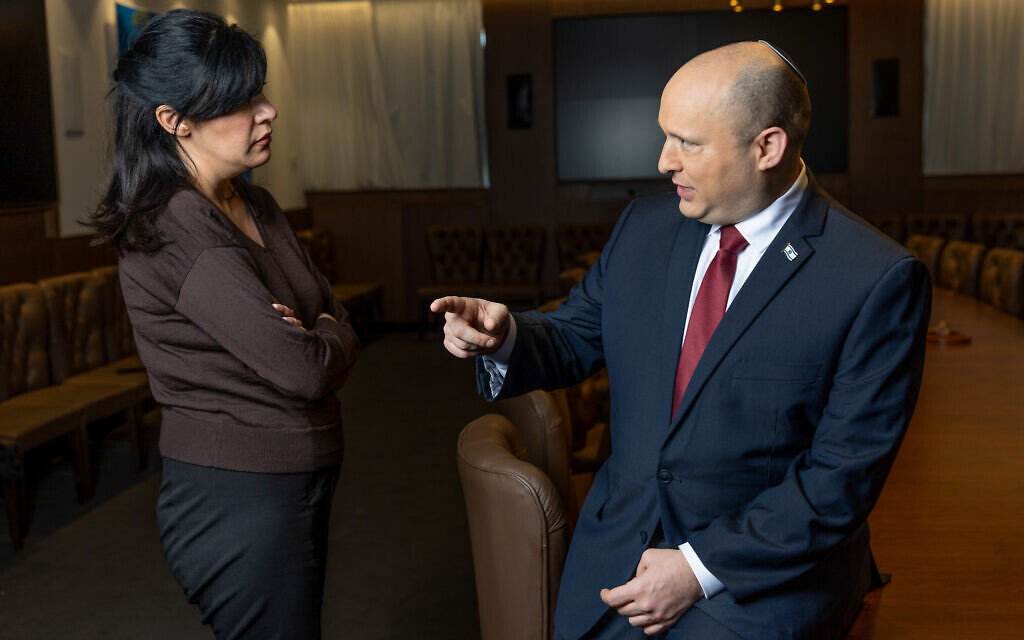 Bennett’s ex-assistant: he gave in to political “blackmail”, failed in the direction

Shimrit Meir, a top diplomatic adviser to outgoing Prime Minister Naftali Bennett, who resigned from her post last month, said in an interview published Thursday that she quit because Bennett was “giving in” to threats from various members of his coalition.

In an interview with the Ynet news site published on Bennett’s last day in office, Meir claimed the right-wing premier was ready to rely on the opposition Joint List party in a “desperate” attempt. to save his coalition.

“I replied that it would be a very big mistake,” Meir said of Bennett considering joining the coalition of Arab parties. “I thought he was mowing down the legitimacy of the government by his willingness to cling [to the leadership].”

Meir suggested that the coalition failed miserably to control its own members: “The political management was a failure from day one. If my area of ​​responsibility had been managed like politics, the Syrians would have already been on the fences [of the Israel border].”

She said the moment “everything started to go totally downhill” was when MK Yamina Idit Silman quit the coalition and other members of Bennett’s party began “blackmailing” the prime minister.

Still, Meir had a few words of praise for the outgoing prime minister, saying “when he was good, he was the best”. She specifically pointed to the IDF’s laser air defense system unveiled in April after a series of successful tests, and following Bennett’s efforts to deploy the technology more quickly. “He wanted the laser, so he drove everyone crazy with the laser – at night it was laser, in the morning it was laser.”

Shimrit Meir, then editor of Al Masdar (The Source), an Arabic-language online newspaper, in Tel Aviv on March 2, 2015. (Tomer Neuberg/Flash90)

During her tenure, Meir was considered one of Bennett’s closest associates. However, she reportedly clashed on several occasions with her political advisers, who felt that she was trying to expand her influence in their spheres, including advising Bennett on his political strategy.

His resignation in May was ultimately the first in a series of departures by key Bennett aides that were seen as marking the beginning of the end of his tenure.

In this week’s interview, Meir claimed that Bennett’s relationship with Yamina No. 2 Ayelet Shaked – who will become party leader in the next election – has been rocky for several years. She alleged that Shaked had no political basis – “on the contrary, she scares [voters]— and that “for several months she threatened Bennett with an unloaded gun.”

Bennett’s former adviser also suggested that the government had “given in to blackmail” by the Islamist Ra’am party when the faction froze its coalition membership due to tensions atop the Temple Mount in Jerusalem.

“Everyone was waiting for the Shura Council that evening,” she said. “Yair Lapid sent [his chief-of-staff] Naama Schultz in Kafr Qassim with an open check. I said to Bennett, you have to stop this. This government will be painted in the colors of surrender to the Arabs. Blackmail and surrender – and we were still in the midst of a wave of terror.

Responding to criticism that she had brought Bennett closer to the political center and was behind Bennett referring to the “West Bank” in a speech instead of using the phrase Judea and Samaria which is preferred by the right, Meir said that a such a claim is “nonsense.”

“[Former prime minister Benjamin] Netanyahu said ‘West Bank’ a million times,” she said. “I don’t remember who wrote it, but I approved it absentmindedly.”

In response, the Likud party seized on Meir’s comments that Lapid had sent aid “to Kafr Qassim with an open check.”

“Lapid will establish a government with supporters of terrorism,” the party said in a statement. “We will establish a broad national government that will lower prices, cut taxes and restore national pride” – echoing campaign promises Netanyahu made in his Knesset address earlier Thursday.

Supporting The Times of Israel is not a transaction for an online service, like subscribing to Netflix. The ToI Community is for people like you who care about a common good: to ensure that balanced and responsible coverage of Israel continues to be freely available to millions of people around the world.

Of course, we’ll remove all ads from your page and you’ll have access to great community-only content. But your support gives you something deeper than that: the pride of joining something that really matters.

Join the Times of Israel community Join our community Already a member? Log in to stop seeing this

You are a dedicated reader

We’re really glad you read X Articles from The Times of Israel over the past month.

That’s why we started The Times of Israel ten years ago – to provide discerning readers like you with must-read coverage of Israel and the Jewish world.

So now we have a request. Unlike other media, we don’t have a paywall in place. But since the journalism we do is expensive, we invite readers to whom The Times of Israel has become important to help support our work by joining The Times of Israel community.

For just $6 a month, you can help support our quality journalism while benefiting from The Times of Israel WITHOUT ADVERTISINGas well as access Exclusive content only available to members of the Times of Israel community.

Thanks,
David Horovitz, founding editor of The Times of Israel