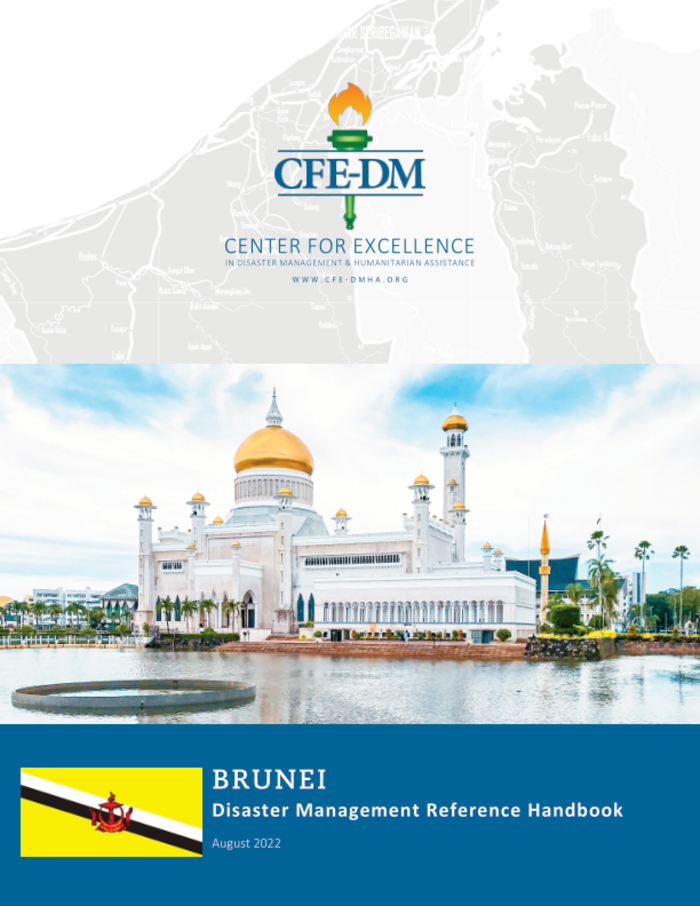 Located on the northwest coast of the island of Borneo, Brunei Darussalam (hereafter “Brunei”) is a geographically small sultanate, consisting of two parts separated by a strip of Malaysian land. The country has a varied relief and a tropical climate. There are less than 500,000 people living in the country and around 75% of the population lives in urban areas, mostly on the coastal plains. More than 70% of the territory is forested.

Despite its location in a disaster-prone region, Brunei itself generally has little exposure to natural disasters. There are floods during the northeast monsoon and transitional rainy season, but the country is not in the path of a typhoon and has not suffered large-scale flood damage. Low-intensity earthquakes have been recorded, although earthquake-related disasters are not common. The country lies along a coastline and is at tsunami risk although there is no historical record of a tsunami hitting it. Despite the overall isolation of the region’s main risks, given the country’s already high exposure to heavy but unpredictable rainfall, the impacts of global climate change threaten to increase the severity of the risks Brunei faces as sea ​​level rises and precipitation patterns change.

Brunei has institutionalized its national disaster risk reduction and disaster management processes under the National Disaster Management Center (NDMC), which is responsible for overseeing all phases of disaster management, from assessment from risks and adaptation to mitigation and recovery. As part of Brunei’s pan-national approach, there is close collaboration and coordination between line ministries and security authorities such as the Royal Brunei Police and the Royal Brunei Armed Forces. Moreover, Brunei is an active and integrated member state of the Association of Southeast Asian Nations (ASEAN), which has developed mechanisms and tools to respond to disasters in a unified and coordinated manner.

The NDMC operates the national level disaster operations hub and supports national level emergency operations, planning and logistics, while each of the country’s four administrative districts also has a Disaster Management Committee. disasters and operates a district emergency operations center. At all levels, Brunei has adopted the use of an incident command system to command, control and coordinate emergency response. In the event of a national emergency, the National Standard Operating Procedures (NaSOP) requires the Public Information Department of the Prime Minister’s Office to take the lead in risk communication and coordinate with other relevant agencies and stakeholders. It communicates disaster-related information to the public through mass media, government websites and social media channels.

Although the government provides most personnel and means for disaster risk reduction and disaster response, some civil society initiatives have developed. A key community risk management partner is the National Red Crescent Society of Brunei, whose 1,500 volunteers are spread across the country’s four administrative districts. The organization’s young cadets are a well-organized and resourced group that supports the country’s disaster management programs in schools. In addition, the Red Crescent and its youth have regular interactions with the police and the armed forces who are the first responders.

As climate change exacerbates the hazards Brunei faces, it can be expected that the ability of government and people to implement risk-reducing adaptations will become the focus of disaster management activities. disasters. Alongside its ASEAN partners, Brunei appears ready to support multilateral action even as it attempts to mitigate its own contributions to sea level rise and warming trends linked to its industry. of oil production. The potential disruptions caused by changes in this major source of income will test the country’s leadership as it continues to diversify its economy while ensuring a high standard of living.