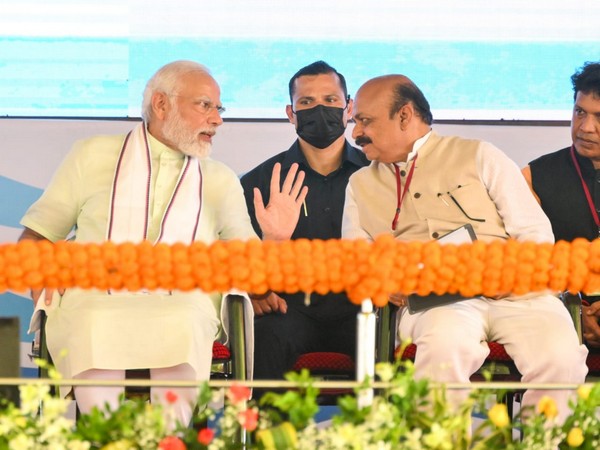 Mangaluru (Karnataka) [India]Sep 04 (ANI): Prime Minister Narendra Modi laid the groundwork for various works worth Rs 3,800 crore at Goldfinch City and approved the new Karnataka Coastal Zone Management Plan.
“I thank the Prime Minister as the new Coastal Zone Management Plan in accordance with the CRZ notification of 2019 has been approved by the Ministry of Forests, Environment and Climate Change. Karnataka is the first southern state of the “India and the second state in the country to get the Plan prepared and approved as per the new CRZ notification. This plan would give a boost to the economy and tourism in the coastal region of the state,” said CM Basavraj Bombay.
He added, “The dual engine governments are in Karnataka and Central. Today, under the Sagar Mala project, 18 projects have been completed and 14 projects worth Rs 950 crore are approved by the ministry. of the Inland Transport and Ports Union. By doing this, the Modi government is playing an important role in the development of the coastal region. This is mainly happening through the blessing of Prime Minister Modi.

Thanking the Prime Minister, Bommai said, “I thank Modi for giving approval for projects which are helpful for the development of Karnataka. The Modi government has given approval for the development of Maajali Port in Karwar at a cost of Rs 350 crore.This is the achievement of governments twin engine.Under the Pradhan Mantri Matsya Sampada scheme, the central government has given approval to provide 100 high speed boats to assist deep sea fishing. will experience an overall development of all these programs.”
He said: “Government, along with the development of two ports, has also embarked on the expansion of Mangaluru and Karwar ports. These two ports will help fulfill the Prime Minister’s dream of Atmanirbhar to strengthen India. government has implemented Vidyanidhi scheme for children of fishermen and this will benefit children of 2 lakh Five thousand houses are being built at a cost of Rs 65 crore Inland and Fishery Institute will be established in Karwar Governments to double engine not only rule Karnataka but also India. It would help in the development of ‘Navabharath’ from ‘Navakarnataka.”
He added, “Today is a golden day in the development of coastal areas and it has happened thanks to the vision of Prime Minister Modi. Port processing capacity must improve to increase exports and imports which will help to get more foreign exchange.The project which was pending for many years is now bearing fruit.As a result of this, a large installation is being provided in the new port of Mangalore at a cost of Rs 3,800 crore and the eight-year dream has come true today.The New Mangalore Trust is growing rapidly and its cargo handling has quadrupled.An LPG terminal is in the works, as is the unit In the coming days, the whole of Karnataka will experience comprehensive development with the advancement of coastal areas.(ANI)