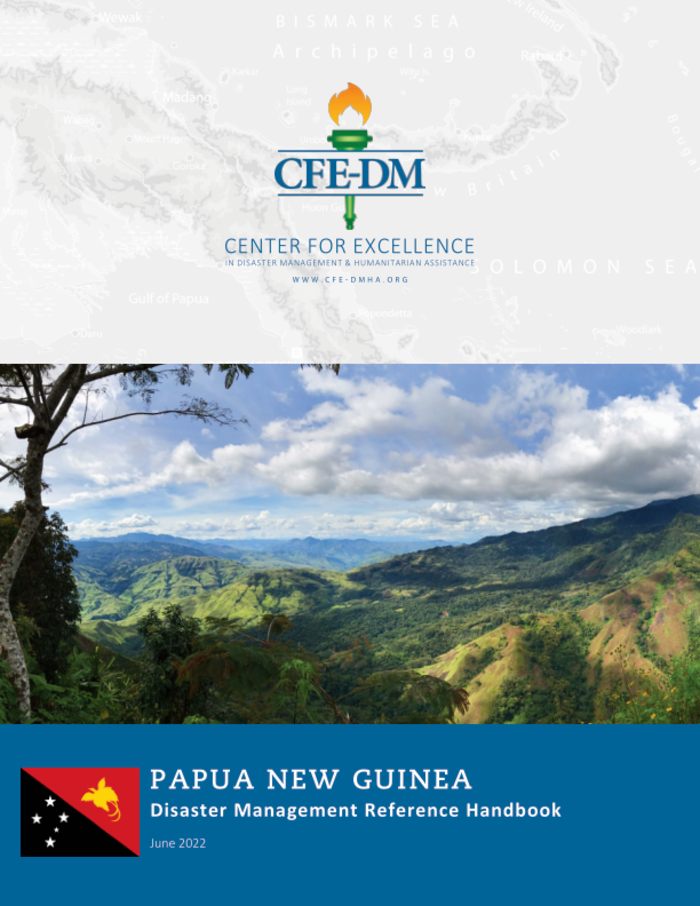 Papua New Guinea (PNG) is the largest Pacific island country in Oceania. The country of 9.3 million people (2022 est.) is made up of the eastern half of the island of New Guinea, alongside four additional islands, and more than 600 islets and atolls. PNG is located in the so-called “Pacific Ring of Fire”, an area where many volcanic eruptions and earthquakes occur. PNG faces natural hazards including earthquakes, tsunamis, volcanic eruptions, cyclones, floods, landslides and droughts.

PNG is among a group of small island developing states (SIDS) that are particularly vulnerable to the effects of marine climate change. Sea level rise is a pronounced risk for PNG, which faces annual sea level rise above the global average. The experience of residents of the Carteret Islands in PNG is the best-known example of climate change-induced displacement, with islanders having lost 50% of their land due to sea level rise since 1994. More recently , high tides affected three provinces of PNG in late December. 2021; they submerged schools, homes, gardens, water catchments and cemeteries, and required a national emergency response.10 The impact of climate change in PNG will be significant given that more than 85% of the population lives in rural areas and depends mainly on subsistence agriculture. for survival.

PNG’s population also lives mostly in rugged mountainous terrain with limited access to basic infrastructure such as roads and bridges, which has hampered access to health care, education and economic opportunities. wider. These challenges will become more pronounced with natural disasters induced by climate change.

PNG’s disaster management framework is set out in the Disaster Management Act 1984 (DM Act) (revised 1987). The DM Act is widely characterized as in need of reform and is currently under review. At the national level, the National Disaster Committee and its executive National Disaster Center (NDC) is the government agency responsible for disaster response under the DM Act. However, in practice, the Government of Papua New Guinea (GoPNG) appoints an Emergency Comptroller to lead disaster response efforts under the Emergency Powers provisions of the Constitution. During a disaster, both an emergency controller and the NDC can coordinate response efforts.

In addition, the PNG Defense Force (PNGDF) plays a role in responding to civil disasters, also in accordance with the constitutional provisions on emergency powers. The NDC was transferred, along with the PNG Fire Service and the National Volunteer Service to the portfolio of the Minister of Defense around 2020. The NDC is currently in the process of transitioning from an office to an independent authority, which will give a role and increased resources within the defense portfolio. At the provincial level, each province has at least one Provincial Disaster Coordinator or Provincial Disaster Center (PDC).

At district and local government (LLG) levels, if there is a dedicated mechanism for disaster risk management (DRM) and disaster response, it is likely to be a single person who is also responsible other administrative responsibilities. Additionally, the United Nations (UN) Resident Coordinator in PNG and the NDC Director co-chair a Disaster Management Team (DMT).

The DMT is a strategic body responsible for coordinating international humanitarian support for national disaster preparedness, response and recovery. The DMT oversees the Intercluster Coordination Group comprised of Cluster Coordinators who work with the GoPNG, Non-Governmental Organizations (NGOs), and faith and private sector partners to provide specific assistance in support of the nationally led response. . In addition, GoPNG has developed a whole-of-government approach to support disaster risk reduction (DRR) through the National Disaster Risk Reduction Framework (NDRRF) 2017-2030.