Nordea Investment Management AB increased its stake in Banner Co. (NASDAQ: BANR – Get Rating) by 3.0% during the first quarter, according to the company in its most recent Form 13F filed with the Securities and Exchange Commission. The fund held 116,193 shares of the financial services provider after buying an additional 3,433 shares during the period. Nordea Investment Management AB’s holdings in Banner were worth $6,904,000 at the end of the last quarter.

BANR has been the subject of a number of research analyst reports. Stephens downgraded Banner shares from an “equal weight” rating to an “overweight” rating and raised his price target for the stock from $66.00 to $67.00 in a Friday report June 17. StockNews.com began covering Banner shares in a research note on Thursday, March 31. They issued a “holding” rating for the company. Finally, Raymond James lowered his price target on Banner shares from $72.00 to $70.00 and set a “Strong Buy” rating for the company in a Friday, April 22 research note.

Separately, director Roberto R. Herencia purchased 1,800 shares of the company in a transaction on Monday, May 2. The shares were acquired at an average cost of $54.73 per share, with a total value of $98,514.00. Following completion of the transaction, the administrator now owns 8,628 shares of the company, valued at approximately $472,210.44. The purchase was disclosed in a filing with the SEC, accessible via this hyperlink. Company insiders hold 1.46% of the company’s shares.

Banner (NASDAQ:BANR – Get Rating) last released its quarterly earnings data on Wednesday, April 20. The financial services provider reported earnings per share of $1.33 for the quarter, beating analysts’ consensus estimate of $1.09 by $0.24. The company posted revenue of $138.08 million in the quarter, versus analyst estimates of $136.20 million. Banner had a net margin of 32.46% and a return on equity of 12.47%. In the same period a year earlier, the company earned earnings per share of $1.33. Sell-side analysts expect Banner Co. to post 5.21 EPS for the current fiscal year.

The company also recently declared a quarterly dividend, which was paid on Friday, May 13. Shareholders of record on Tuesday, May 3 received a dividend of $0.44 per share. This represents an annualized dividend of $1.76 and a dividend yield of 3.15%. The ex-dividend date was Monday, May 2. Banner’s payout ratio is 30.82%.

Banner Profile (Get an assessment)

Want to see which other hedge funds hold BANRs? Visit HoldingsChannel.com for the latest 13F filings and insider trading for Banner Co. (NASDAQ:BANR – Get Rating). 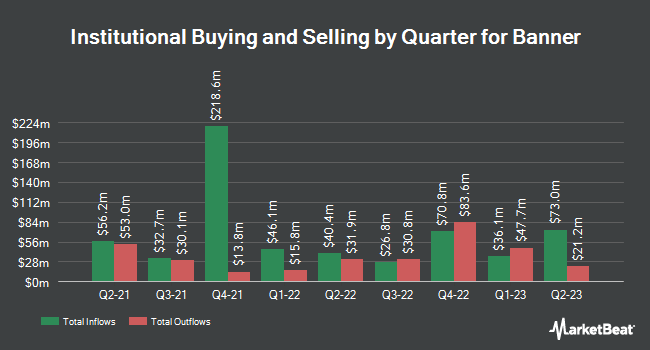 Receive news and reviews for Banner Daily – Enter your email address below to receive a concise daily summary of breaking news and analyst ratings for Banner and related companies with MarketBeat.com’s free daily email newsletter.