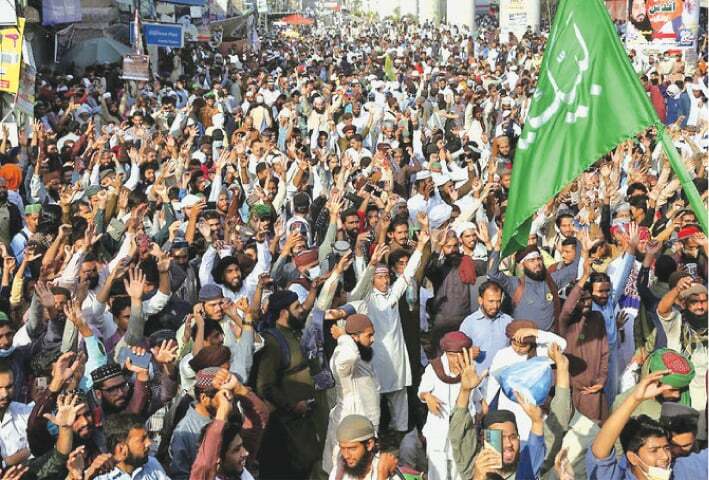 Recently, a foreign diplomat asked me about the threat posed by the Tehreek-i-Taliban Pakistan (TTP) metropolitan area. My response was that the manner and haste with which the government entered into talks with the group was a threat greater than any capacity of the TTP to generate violence and which the state could and should counter.

He then asked me about Tehreek-i-Labbaik Pakistan (TLP). My response was that TLP was, and remains, a much bigger threat.

The reason is simple. When the state had to contend with the TTP phenomenon, it showed little initial understanding and even less capacity to deal with terrorist tactics and attacks by the group. In a few years, and after numerous punishments, the state has developed a much greater capacity to anticipate such attacks or react to those that do occur.

This capability is not only a function of how the state can use a combination of intelligence and kinetics operations, although that combination is a vital component of state capability. The other aspect – in some ways equally, if not more important – is the state’s ability to isolate these groups. It is a function of public buy-in.

The horrific Sialkot incident is not just a public order issue and has far more serious implications than the threat posed by the TTP. But the state’s lack of capacity to confront TLP as a state of mind prevents a strategic response

These are the two preconditions – isolating a group and gaining public buy-in – that help the state not only to use force against the TTP (or the Baloch terrorist conglomerate), but to translate it into the utility of force.

Neither of the two prerequisites is obtained in the case of TLP. Unlike the TTP or the Baloch Raaji Aajoi Sangar (BRAS) alliance, the TLP ideology – which uses the honor of the Prophet (PBUH) as a central tenet – is embedded in society and transcends other denominational differences. Also, as Umair Javed, a sociologist, noted in his November 1, 2021 Dawn article, TLP “is a movement which is more rooted in the urban and peri-urban Punjab than any previous religio-political movement”.

It means two things. First, the TLP makes demands using socially accepted markers and labels the state’s response as brutal to justify its own violence, portraying it as reactive and not proactive. Second, the state, for all its rhetoric, cannot use force against the group and its supporters because the TLP is using its democratic right to protest.

In other words. When Prime Minister Imran Khan says the state will not allow TLP to march on the capital, he is skating on thin ice. His party, when in opposition, marched on the capital and engaged in hooliganism and vandalism on more than one occasion. Likewise, when the TLP first marched on the capital, Khan and other PTI leaders cheered on the group as it humiliated the Pakistan Muslim League-Nawaz (PML-N) government. The issue of ideology becomes more complicated, as the state itself has nurtured this ideology for decades and more recently has helped convex its violent expression through the TLP, albeit for the sake of political machinations.

If one were to use a national security lens, not only in terms of physical security, but by employing a broader definition of it, the TLP would present a greater and more complex threat than the TTP and other groups. similar. To consider.

It is no coincidence that some perpetrators of the horrific Sialkot incident not only openly justified their barbarism in front of television cameras, but also brandished the TLP slogan. They may or may not be group members, but that doesn’t matter. What is of great concern is the fact that people are now referring to a group that they saw committing acts of violence and getting away with it, as the state cannot develop a response to it. democratic violence. The Sialkot incident nearly created a diplomatic crisis between Pakistan and Sri Lanka, two countries which enjoy cooperative relations across a wide range of interests, including defense.

Rajco Industries, one of the major exporters of sportswear to the European Union, contributes foreign exchange. It is one of the beneficiaries of the Generalized-Plus Preferences Scheme (GSP +) granted by the EU to Pakistan.

Despite two European Parliament resolutions earlier this year demanding the withdrawal of GSP + for Pakistan, the European Commission extended the facility until 2022. But, as the reports suggest, among the various conventions Pakistan has signed for upholding the status, issues of human rights and freedom of expression, including religious freedoms, continue to come under criticism from the EU. The withdrawal of the SPG + facility could be a blow to Pakistan’s exports and, by extension, to its economy. It could also lead to other restrictive measures (including on travel) with negative consequences for Pakistan in a wide range of sectors.

The issue of religious sentimentalism is a loophole that has been and can be exploited by hostile outside actors. It is a force multiplier because it has a cascading effect. The TLP’s violent marches and the demand that Pakistan sever diplomatic relations with France have already created a situation. The spontaneous mob that killed Priyantha Kumara, Sri Lankan Managing Director of Rajco Industries, is another incident of external dimensions.

It also gives hostile elements the opportunity to orchestrate more such incidents against foreign nationals working in Pakistan. In other words, it is not only a public order problem linked to other socio-economic and religious factors, but must be approached from a strategic perspective.

State responses, as noted above, are complicated by the socio-religious nature of the problem. The problem is further complicated by a multitude of laws (blasphemy laws, for example) that have not only helped create the current state of mind, but which allow crowds to rely on them. Note PM Khan’s reference to self-defense. This is a bad reference to what lynchers do. They don’t do themselves justice, they flout the law and act like common criminals. Yet in a deeply ironic way, the term vigilantism describes what is happening on the ground.

The Sialkot police acted with haste. District Police Officer Omer Saeed, an excellent professional, had to act quickly not only to track down, locate and arrest the main culprits and other members of the mob, he had to approach a number of religious groups and organizations. civic to ensure that none have made a statement. favorable to lynching. This is important, because we have seen what happened after the arrest of Mumtaz Qadri.

While in this case the TLP distanced itself from the act due to a wave of horror and condemnation that followed the lynching and desecration of Kumara’s body, it could have tipped into the other way.

In the case of the TTP, given the capacity of the state, the outside world sees Pakistani countermeasures as necessary and supports them. With TLP – using the term not only to denote a group but a state of mind – the lack of state capacity becomes a problem with not only internal but external dimensions.

As I have written elsewhere, referring to the Jim Crow laws in the southern states of the United States and the lynchings that resulted from it, a problem that takes root in a society – whether it’s racial superiority or , in this case, of an ever broader definition of blasphemy – is a hard nut to crack. It demands immediate attention to long-term approaches.

The first must be top-down: a ruthless crackdown on those who hold such views and participate in acts of violence and hate propaganda; the second, ascending: a mass movement of victims and their allies which succeeds in dismantling the social and legal legitimacy of the violence directed against them.

Right now, it doesn’t look like either is coming.

The writer is a journalist interested in foreign and security policies. he tweets @ejazhaider