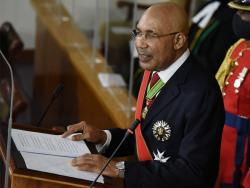 However, murders continue to experience a disturbing trend.

“Our homicide rate remains at an unacceptable level and gunmen and gangs continue to threaten our peace and security,” Allen said.

The Governor General delivered the Speech from the Throne 2022-23 at Gordon House, to mark the opening of Parliament.

Allen said a key piece of legislation requiring reform is the Bail Act and that new provisions will be enacted regarding the granting or denial of bail and related matters.

Last June, National Security Minister Horace Chang called for stricter bail conditions and a review of considerations for people who commit serious crimes like murder, saying those accused of murder continue usually to wreak havoc when admitted on bail.

Some 85% of homicides in Jamaica are committed with an illegal firearm.

The Governor General said the government is moving forward with several new and revised laws, including:

The tabling of the gun bill coincides with the government’s “Operation Get Every Illegal Gun” campaign.

The multi-million dollar incentive fund, with a target of $250 million, will significantly increase the reward for information leading to the recovery of illegal firearms.

In addition, Allen said changes to the Companies Act are another legislative priority that will be pursued, with the goal of strengthening the disclosure of beneficial ownership information of companies.

This, he said, will align with Financial Action Task Force standards, to combat money laundering and terrorist financing.

Earlier this week, Financial Investigations Division Senior Director Keith Darien confirmed that his agency will target those involved in criminal activity who invest heavily in the real estate sector.

The Minister of Security had recently stated that money laundering in Jamaica was a challenge to the entire security process in the country and that even in the face of a downturn in economic activity, due to the pandemic, the sector construction seemed to be in full swing.

Defense management: DOD should collect more data on stakeholder input and performance of its reporting process to Congress

Why we need national laws to protect women, and why it’s everyone’s job to demand them