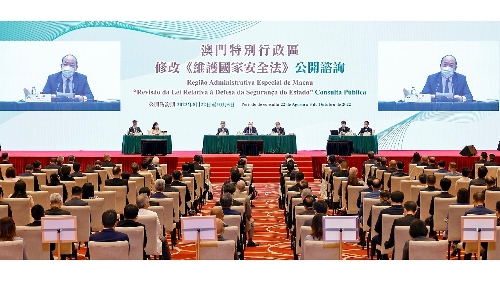 MACAO, Aug. 27 – Chief Executive Mr. Ho Iat Seng has said that the law amendment is an important event this year regarding the policy of the Macau Special Administrative Region (SARM) government in terms of safeguarding national security. The issue was closely related to the long-term stability of the nation as well as the enduring prosperity and stability of Macau. The Chief Executive has proposed four aspirations for all sectors regarding the amendment of the law.

The RASM government held the first public consultation session on the amendment to Law No. 2/2009 – “National Security Safeguarding Law”, to listen to the opinions and suggestions of the National People’s Congress, members of the National Assembly Committee of the Chinese People’s Political Consultative Conference in Macau, and representatives of the political and legal sectors.

The Chief Executive said that the National Security Safeguard Law currently in force embodies Macau’s constitutional responsibility to safeguard national security in accordance with Article 23 of the Macau Basic Law, thus greatly facilitating the national security and Macao’s long-term stability. However, due to the pronounced changes in the internal and external security situation and the serious security threats facing the country in different regions, the Macau government needs to make greater preventive efforts to secure its governance.

In the face of these national security risks, amending the National Security Safeguard Act would be the only way to safeguard national security and actively and diligently follow a holistic approach to national security. The Macao government therefore decided to start with this amendment to the law. During this 45-day public comment period, the Macau government will listen to opinions from all sectors and the public, in order to respond more effectively to today’s global security challenges. The Chief Executive urged all sectors in Macao to contribute ideas and suggestions on amending and improving the law.

While explaining the relevant policy, Security Secretary Mr. Wong Sio Chak said that the Macau government has promptly revised the existing law on safeguarding national security and implemented relevant preliminary works – including theoretical research, case analysis and comparative law studies – due to the concern and instructions of the central people’s government.

Mr. Wong hoped that this amendment to the National Security Safeguard Law could correct the problems and shortcomings of the existing law, allowing the law to reach the same level as the laws protecting the relevant laws of the nation and of the Hong Kong Special Administrative Region, so that the MSAR can implement security law in accordance with national standards, improve Macau’s ability to coordinate and administer national security affairs, comprehensively prevent and punish violations against national security, effectively prevent interference from outside forces, safeguard national sovereignty, security and development interests, and maintain prosperity and stability in Macao.

During the first public consultation session, 11 participants gave their opinions and suggestions. They all approved and supported the amendment to the law and said that they thought it was the right time to start the work of amending the law. As the internal and external security situation and risks continued to evolve and increase, the amendment of the law was the way to help perfect the National Security Safeguard Law, which effectively strengthens the national security, maintains Macau’s public order, and facilitates Macau’s fulfillment of its constitutional responsibility.

Concluding the session, the Chief Executive urged participants to carry the message about the amendment of the law to all members of the community, and raised four aspirations. It was about :

The Chief Executive also said that the amendment to the law aims to ensure that Macao’s national security safeguarding work can better adapt to the new situation and the demands of the times. Macao needs to keep up with the times to quickly perfect the National Security Safeguard Law and take a holistic approach to national security. This is to more effectively safeguard the country’s sovereignty, security and development interests, protect the safety and well-being of the people of Macao, and ensure a better future for the country and Macao.

Some 200 participants attended Friday’s public consultation session, including: Vice Chairman of the National Committee of the Chinese People’s Political Consultative Conference, Mr. Ho Hau Wah; the Speaker of the Legislative Assembly, Mr. Kou Hoi In; the President of the Court of Cassation, Mr. Sam Hou Fai; the Secretary for Economy and Finance, Mr. Lei Wai Nong; the Secretary for Social Affairs and Culture, Ms. Ao Ieong U; the Secretary of Transport and Public Works, Mr. Raimundo Arrais do Rosário; the Attorney General of the Public Ministry, Mr. Ip Son Sang; the Commissioner against Corruption, Mr. Chan Tsz King; the auditor, Mr. Ho Weng On; the Commissioner General of the Unitary Police Department, Mr. Leong Man Cheong; the Director General of Macau Customs, Mr. Vong Man Chong; members of the Executive Council and the Legislative Assembly; deputies from Macao to the National People’s Congress; members of the National Committee of the Chinese People’s Political Consultative Conference in Macao; leaders and representatives of various organizations and associations of various sectors; the Judicial Council; the committee of prosecutors; and officials from various Macau government offices.

The 45-day public consultation on amending the National Security Safeguard Law began on August 22 and will end on October 5. The consultation document on amending the National Security Safeguard Act has been uploaded to the dedicated webpage: www.pj.gov.mo/RLDSE/zh/default.html for public viewing and downloading. Citizens can also pick up the printed version of the consultation document on site during public consultation sessions, respectively from the security secretariat; the Prefecture of Judicial Police; the public administration building; integrated government service centres; Central District Public Service Center; and the Islands District Utility Center.

The consultation period covers eight sessions. Of the seven still to be held, four will relate to the economy and finance; social and cultural; transport and public works; and the administrative and judicial sectors. The other three sessions are open to all citizens of Macau. To register to participate in the public consultation sessions, individuals can do so via the aforementioned webpage or by telephone on 8800 6323.

The Macau Government also welcomes submissions of views and suggestions regarding the consultation, either by written correspondence (by post or by hand), telephone (8800 6321), fax (8800 6322) or e-mail.