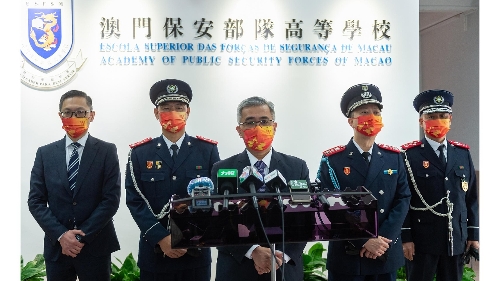 The revision of the law on safeguarding national security should be completed this year: Secretary

MACAO, January 10 – Security Secretary Mr. Wong Sio Chak said today that planned improvements to Macao’s legal provisions and the city’s mechanism to safeguard national security are progressing in an orderly fashion. The government was working to complete the review of relevant laws during this year, he added.

Secretary Wong detailed the government’s work on safeguarding national security while addressing reporters on the sidelines of a celebration hosted by Macao public security forces and departments to mark Chinese People’s Police Day .

Advancing Macau’s efforts to safeguard national security was done through a two-pronged approach: improving the city’s legal provisions and the mechanism responsible for safeguarding national security. Regarding the latter, an executive body had already been set up, said Mr. Wong.

On optimizing the city’s legal system, a bill on interception and protection of communications has been tabled in the Legislature and will soon pass second reading, the secretary said. A bill to revise the law on safeguarding national security was being drafted and would be submitted for public consultation in due course, he added. The government hopes that the process of amending the law on safeguarding national security will be completed during this year, Wong said.

Raising awareness among the community about safeguarding national security was a top priority for the government, Wong said.

The secretary also told reporters that security authorities assessed the community’s current safety as similar to what it was in 2021.

Security authorities would closely monitor any upward trend in internet-related crimes and other crimes involving online payments. Mr Wong noted that due to the COVID-19 epidemic and a growing trend in consumer behavior around the world, members of the public were inclined to buy more online and spend more on entertainment online. line.

Mr Wong further said that security authorities remain vigilant over any potential risk to the safety of the Macau community, including due to the refresh of the city’s gaming concessions and any adjustments to cooperation agreements between dealers. or current game sub-dealers and game promoters. .

Macau has remained a safe and secure city, without any significant incidents endangering the safety of the community, Wong added.


The priority of EIN Presswire is transparency of the source. We don’t allow opaque clients, and our editors try to be careful to eliminate bogus and misleading content. As a user, if you see anything that we missed, please bring it to our attention. Your help is welcome. EIN Presswire, Every’s Internet News Presswire ™, tries to define some of the limits that are reasonable in today’s world. Please see our editorial guidelines for more information.

Overview, Opportunities, Key Companies and Forecast to 2028 – Industrial IT